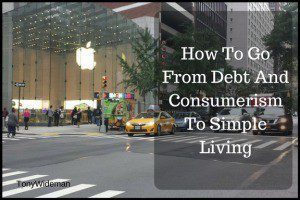 Debt and Consumerism To Simple Living

Most people are caught in debt, lots of debt. Many people have the disease of consumerism – buying the newest thing that is marketed to them.

However, there are growing numbers of people who are awakening to these two mainstream problems and they are doing something about it, even considered radical — living a simpler life.

I was raised on the farm for a few early years of my life. Both my grandparents were farmers until they “retired” (farmers never retire). My father didn’t want the farm so my parents sought modern ways of making a living.

I didn’t have a lot of money growing up but I didn’t know it then – back in the days before computers, video games, and all the freakin toys we are exposed to today. When you don’t have money, you don’t buy things.

I, as well as you, were not concerned about the things in the world back in those days. One bad thing in the world every few years – we could handle that.

One thing that is strikingly different is that most people are in debt, some in so far that it may be unrealistic that they’ll ever come out of it.

Would You Like To Learn To Bring Dead Batteries Back To Life Is Simple!


Debt And Consumerism To Simple Living are two masters that control everything about you. From where you live to what you eat to the fear you always feel — these two demons will control your life.

As the world becomes smaller and its problems become bigger, I have radically changed the way I make money, save money, and spend money. Just several years ago I didn’t think much about it.

I made money and spent it; it wasn’t in consumer debt, only real estate debt, which everyone thinks is okay (it’s not). A comfortable life; not Beverly Hills living but comfortable enough not to complain (about money).

But now I’m selling stuff I don’t need or haven’t used in a year. I’m not buying all the crap that I end up sticking in my garage. Real estate included. I’m thinking and planning for the future a lot more.

So I’m always asking myself when I see something I really want — do I really NEED it and what will I be doing with it 6 months from now?

What is your story? Have you become a victim of debt and consumerism? Debt And Consumerism To Simple Living? Are you fantasizing about a way out? You can do it but you have to DECIDE that you’re going to make a change – that you MUST make a radical change – otherwise you’ll cave-in to your weakness and fall to the strengths of the billion-dollar companies who know exactly what you want, what your weaknesses are and how to get you to spend your money and credit with them.

Homesteading has become a fantasy for some and a reality for others. It is, by definition, a simpler way of life – a self-sustaining, thoughtful way of life.

But there could be a balance between modern living today and the old ways of homesteading. You don’t want to go back to outhouses, spending all day sourcing food, and doing backbreaking labor for cheap like they did. How about some of it? Could you figure out how you can have a little of both — living with some modern conveniences, simply?

I get that people want to live off the grid – so do I. The problems of being so dependent on multinational companies, local government, state government, and federal government for water, food, energy, and money (city water, foreign foods, electricity, social security, healthcare, Medicare…) should cause people to think about what kinds of situations we’re allowing ourselves to get into.

It’s prudent to have several sources of energy, food, and income. That’s what living off the grid means to me. It’s not that glamorous. Not a happy hippy commune. It’s a way to live life differently — and not be so dependent on others, like the government and Walmart, for those things.

As it is now, the government is seeping deeper into people’s lives and Google and Facebook know more about you than you would believe. That is not healthy at all — it’s creepy and getting worse, no?

I think homesteading is more necessary today, given the current circumstances than ever before.

Not survivalism as characterized by some radical survivalists. I don’t agree with all my survival friends about how they want to live: assault rifles, combat devices, attack dogs, waiting to waltz through the apocalypse in military gear.

Too fear-based for me. Sure, I want to be “prepared” for disaster or disorder, but let’s be practical here, I still have to live with my wife and she’s got to put on her makeup every day. That’s okay.

On the other hand, I want to think differently than the heavily indebted, massively consumptive public. Don’t you? You don’t want to get on their bandwagon that’s choking their lives further every day.

Homesteading asks different questions of you:

The whole is bigger than the parts that make it. Creativity and resourcefulness will cause you to live a different lifestyle.

Are you ready to do things differently?

Where do you find joy in your life and what will it take for you to go there?

I bet if you were out of debt, exorcized your consumer demons, and planned your life, you could easily join those who are freer and have a mindset of a homesteader – those who live a more purposeful life (yes, you can argue that homesteading is not purposeful or even practical, but how many other examples can you offer to prove your point?)

I look forward to seeing you on the journey from debt and consumerism to simple living on a homestead. 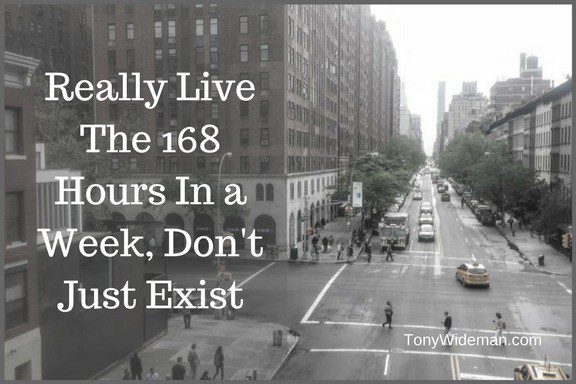 168 Hours in a Week . Do you realize there are 168 hours in a week for you to do your magic? Some people think 168 is a lot of time and others think it is not enough. Are you happy with what you doing at that time? If you live a life of drudgery…

Infrared Sauna Blankets Infrared Sauna Blankets are becoming more popular by the minute. Daily use is promised to detox your body, soothe sore muscles, improve skin and burn calories while leaving you thoroughly relaxed. My first response is to call Bullsh*t but I decided to do some research and give them a try. Here is… 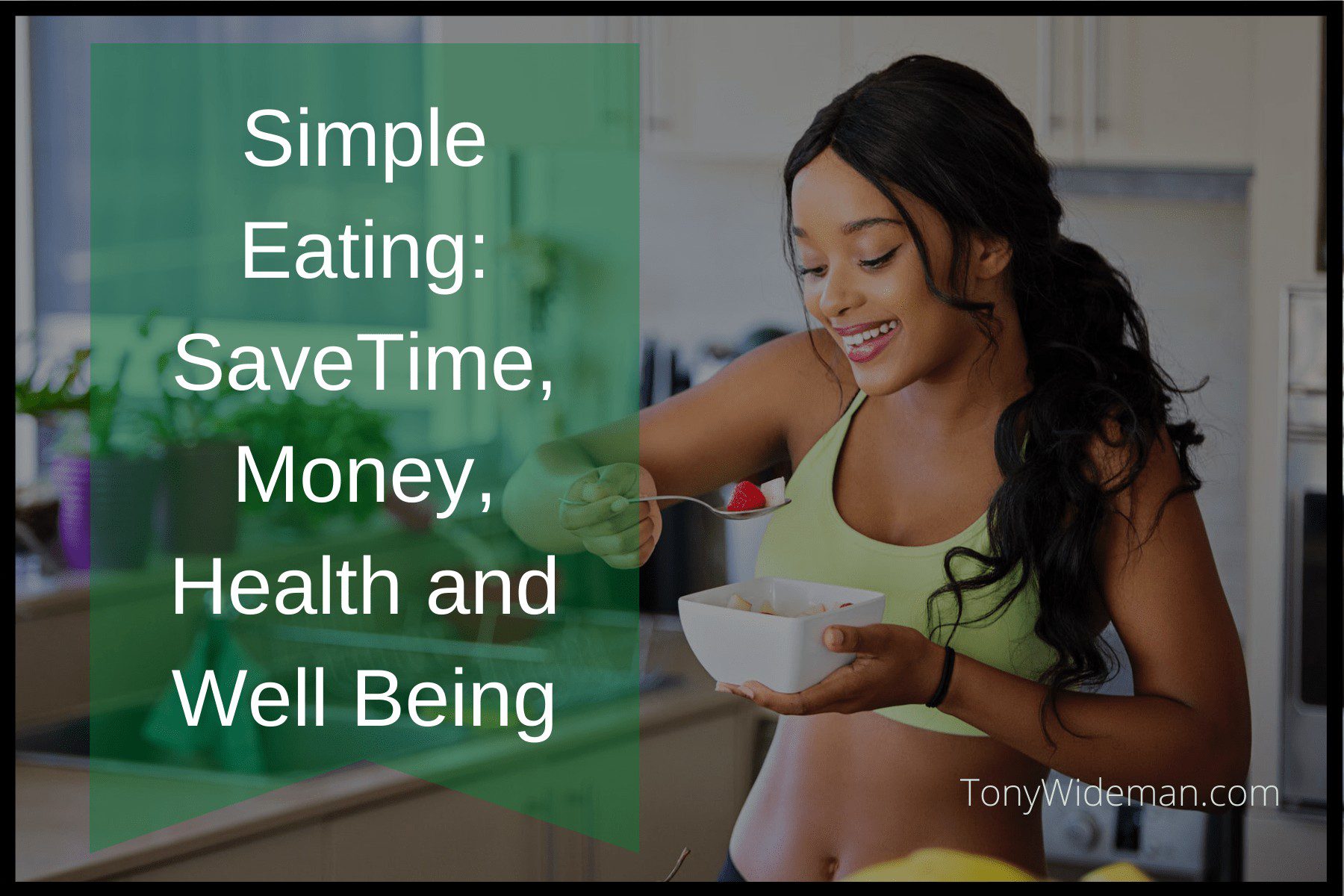 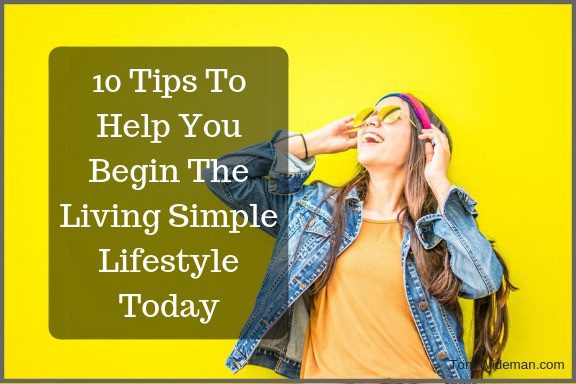 Living Simple Lifestyle . Living Simple Lifestyle is sometimes not simple to do. A lot of us are overwhelmed by the amount of stuff and things we have to manage in our lives. The professional and personal obligations we heap upon ourselves can often consume more than a whole day. Running on the proverbial hamster…