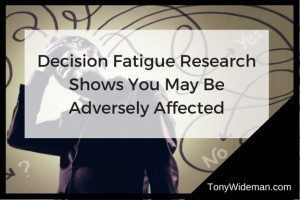 Why waste brainpower on trivial decisions like what to wear for the day? Then when it comes time to make critical decisions you are experiencing decision fatigue and miss the mark.

Think about it this way. The decision fatigue research shows you have an exact number of decisions you can make for optimal brain performance. Why waste them on trivial unimportant tasks? The few you waste may come back to bite you later in the day.

Many successful people acknowledge the brain’s limitations for optimal decision making and manage it for success.

I remember reading that Barack Obama works to conserve his optimal decision-making capacity for important decisions by cutting down on the number of trivial decisions he has to make during the day.

One of the ways he does this is by limiting his business wardrobe to gray or blue suits and by building routine into his day.

Building routine limits trivial decision-making drastically. The routine becomes automatic without thinking. Like being on autopilot. Breaking away from routine can lead to poor decision-making.

Like when The President broke the internet when he wore an unfamiliar khaki suit.

Maybe it was a present from his mother-in-law and they had to wear it at least once. Or he just did not get a good night’s sleep.

‘I’m trying to pare down decisions. I don’t want to make decisions about what I’m eating or wearing. Because I have too many other decisions to make.’

Steve Jobs wore his signature black turtleneck with jeans and sneakers daily. Mark Zuckerberg wears a gray t-shirt with a black hoody and jeans 99% of the time.

You always see pictures of Albert Einstein wearing several versions of the same gray suit so that he wouldn’t have to waste time deciding what to wear in the morning. Even I limit decision-making with a Minimalist Uniform Wardrobe.

Decision fatigue research is real as suggested in this study on Judicial Parole Rulings reported by Jonathan Levav of Stanford and Shai Danziger of Ben-Gurion University.

This would suggest the chances of getting a favorable parole decision to grow dramatically if the Judge did not suffer from decision fatigue and was well rested beforehand. Or if your ruling was made early in the day or just after a lunch break.

Decision fatigue is seen in sports regularly late in games. The Quarterback making poor passing decisions during late game pressures. The basketball player passing to the wrong player, calling a timeout when his team has none left or fouling because he did not know what else to do.

Decision fatigue can happen to all of us late in the day.

Your Local Supermarket has coined the term impulse buying and incorporated it into their marketing strategy, but it is just a form of decision fatigue. They place the impulse buy items near the checkout.

Items you probably would normally avoid.

But knowing you have just spent time making a hundred decisions about choice, budget, nutrition, and value during shopping.

Now that you are exhausted and may have been dealing with children they attack you at the check out with the impulse buy an item and a few toys and candy at the checkout.

Oh yes! Decision fatigue has cost you money more than you know. LOL

I guess you see where I am going here. The Minimalist Lifestyle champions striving to cut the unnecessary out of your life. If it is not essential or brings you joy it should be discarded as a form of philosophy. This lifestyle limits the need to make many trivial decisions.

If you only have a few items of clothing to wear, a choice of what to wear in the morning is limited. If you have limited your shopping to only what you need and not things you want just for the hell of wanting it you don’t have to make decisions on what to buy.

Impulse buys at the checkout or anywhere else is never a problem. The answer is always no! There is no shopping inspired by advertising, researching online and no time wasted because the decision has already been built into the lifestyle.

That is a simplification on the subject of decision fatigue but you get the picture. Hopefully, you can end your day still fresh and not mentally fatigued and go enjoy life.

Other Ways to Combat Decision Fatigue

1. Make your big decisions in the morning.

This is obvious but must be said. Prioritize your decision-making. Important decisions should be made early in the day whenever possible.

You should plan your day so that this happens. If an important decision needs to be made late in the day try to postpone it and get back to that person.

If an important decision needs to be made late in the day and cannot be postponed to choose the most simple option. Choose the option that will cause the least damage or the path of least resistance. Make this the routine.

3. It does not have to be perfect.

Done is better than perfect. Don’t agonize over the decision. Make the first best choice that will yield the closest to your desired results and be done with it.

Perfect is an illusion anyway and taking longer to make the decision will not yield dramatically better results.

4. Limit Your Time On Social Media.

I am going to come right out and say it, SOCIAL MEDIA IS A BRAIN DRAIN! SOCIAL MEDIA IS THE DEVIL! I know it is fun and can be great for business but we need to limit our time using it.

Sometimes hours just fly by and you are making brain-draining decisions the whole time without you even realizing it.

This is a rule of mine. If it is something that I do not feel amazing about then my decision is no. If I am asked to do something I use that rule. This eliminates me from having to make a decision.

This rule eliminates, guilt, peer pressure, and strong-arm tactics. I don’t have to make the decision because the rule makes it for me.

I forget about it and move on to the next decision that has to be made. If it is not something I feel GREAT about the no-decision can’t hurt me. If upon thinking about it and I change my mind I can always change it to a yes at a later date.

Decision fatigue research is real and if not acknowledging it can lead to making poor or disastrous decisions later in the day. What do you do to combat decision fatigue?

Is it possible making poor decisions due to possible decision fatigue been a problem for you in the past? Tell us about it.