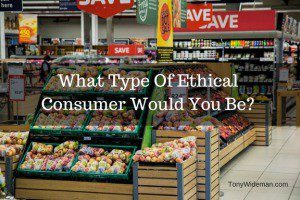 Should ethics play a role in your purchasing decisions? How much? There are many levels of ethics that could come into play as you make your buying decision. Where would you like to come down as an ethical consumer? Do you care at all?

Do you care about human rights? As an ethical consumer, what will come between your beliefs and the items you consider purchasing?

“Shopping is more important than voting”

– Andrew Wilson, Director of the UK’s Ashridge Centre for Business and Society

As a Living Simple Minimalist, I don’t shop much anymore. There is still a process I use before I make a purchase and being an ethical consumer almost never plays a part. I ask myself if I really need the item?

If I already have an item that could sever the purpose of the potential new one? I ask where will I store the new item and continue down my list.

For me the only time ethics comes to play is when it is political. There are products, businesses, and companies I automatically avoid spending money with because of my political beliefs.

There are also companies I avoid for what I feel to be well-publicized ethics violations. I believe given the information we all would take an ethical consumer stance.

The Ethical Consumer and Informational Marketing

When it comes to being an ethical consumer I believe it is safe to say almost all of us are opposed to child labor and other unethical practices against human beings, animals and the environment.

These actions would negatively affect most people’s purchasing decision if they were aware that a company engaged in such practices.

The problem with identifying companies that be engaging in practices that would offend an ethical consumer is insufficient marketing. There is no marketing that would make consumers more aware of ethical and unethical practices that a company may be engaged in and no company will willingly distribute such information.

Most companies don’t see the ethical consumer as a viable market. Unfortunately, we all regularly buy products that are produced by child labor, harms the environment, developed by torture and testing on animals.

We regularly buy products that are killing the people that are producing them but we are just not aware of it.

I believe with a little push and proper awareness businesses would market more to the ethical consumer. As of now they really don’t have created and marketed these types of products and services because the consumer is not aware of the possibilities.

People regularly buy hybrid cars, organic foods, environmentally friendly detergents and energy-saving light bulbs. This shows an interest but there is not a push for more.

Yes, there are other benefits to those products, saving money on gas, health benefits, style, and comfort, ethical properties are not really marketed as well. If the ethical consumer was presented with the information and business catered to the market I think the market would grow.

There are times when the information is not presented and the otherwise ethical consumer buys the products that do not support their values.

Likewise, people both want to be ethical and they want to ignore ethics, such as eating healthy, exercising and saving money. Sometimes all that is needed is a marketing push toward better behavior.

When given information the ethical consumer will behave more according to their values in purchasing decisions.

Value vs. Values and The Ethical Consumer

When people are surveyed they choose more often than not to identify as an ethical consumer. Studies of purchasing habits conflict with those surveys because you often only have the person’s word to go on.

When businesses create products and services that cater to the whims of the ethical consumer they are met with lagging sales and indifference.

Is that due to insufficient marketing as discussed earlier or because people just are not as ethical they believe themselves to be? These results may discourage companies from developing products and services for the ethical consumer.

They revealed the reluctance to consider ethical product features as anything but secondary to their primary reasons for purchasing the products or service.

Most people would believe there would be differences influenced by gender, education, income, culture, domicile, basic values, and so on proved unfounded. consumers behave similarly despite those differences. Cost does matter to most consumers despite ethical concerns.

The sad fact of the matter is even the most socially responsible ethical consumers do not care enough to pay a higher price for products and services that are more in line with their ethical standards.

As a living simple minimalist, I have to ask is the ethical consumer dead? I would say not. It is true that for now, the price is an important determining factor in deciding whether to purchase one item over another.

There is strong evidence that when equipped with the knowledge of a company’s business practices the ethical consumer re-emerges and makes purchasing decision consistent with their values.

The question is who’s going to equip the consumer with that information? This is an important role that needs to be filled.

Who will equip the consumer with information on companies that break the law? Those who use child labor, harm the environment, abuse animals, break health laws and abuse human rights?

Money and power usually get these concerns swept under the rug. Even worst, when a company is convicted of these violations they get what amounts to a slap on the wrist and the public is never notified.

We will not even discuss companies that manufacture in places where these are not even crimes. We need to do better as a human race to take better care of each other and the environment.

Earning ever growing profits should not be the companies only goal.

This is a good thing. Because the growth of the ethical consumer market will be noticed by mainstream companies and force a change in the practices of the violators.

Be the change you seek. Be an ethical consumer. Shopping can be as powerful as voting.